The Three-Country Cairn is located on the former border between Sweden and Norway. When the border between Finland and Sweden was defined in the Treaty of Hamina in 1809, the tripoint was created.

The original cairn was erected on solid ground in the valley. When Finland and Norway defined their borders in 1896, the exact tripoint was calculated, and it was found to be west of the 294 cairn, in the Kolttajärvi lake. A man-made island was built out of rocks, and a 2.5m (8-foot) cairn was constructed. Notably, there was no Swedish representative present at the time. In 1901, representatives from all three countries were invited to a review, and the tripoint was approved. However, the cairn was continuously dismantled by ice and water, until a new one was constructed from concrete. The current cairn was inaugurated in July 1926.

In summer you can reach the Three-Country Cairn with the MS Malla, which goes from Kilpisjärvi village to Kolttalahti. From the Kolttalahti port, it is a 3km (2-mile) hike to the tripoint. You can also reach the Three-Country Cairn by taking the 11km (7-mile) hiking trail through the Malla nature reserve. You may freely circle the cairn, providing you do not have goods to declare to customs, of course, since all three borders are internal borders of the Schengen Area. Residents of Nordic countries do not even need to take their passports with them.

National Veterans’ Day is celebrated in Finland on 27 April, the anniversary of the end of the Lapland War. On this day in 1945, Finnish soldiers raised the Finnish flag on top of the Three-Country Cairn to mark the departure of the last German units from the country. Kilpisjärvi’s residents celebrate National Veterans’ Day every year by gathering at the Three-Country Cairn. Most visitors come to the cairn by skiing, to honour the veterans, but many also come by snowmobile. After the official celebrations arranged by the Northern Brigade Guild, the municipality and parish of Enontekiö, and the Lapland border guard, more festivities are organised in the village of Kilpisjärvi.

In spring 2005 Victoria, Crown Princess of Sweden, visited the Three-Country Cairn to inaugurate the snowmobile trail which takes her name. 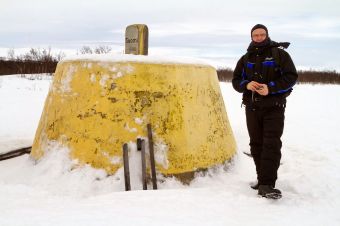